How Can White Fillings Make Your Smile Last 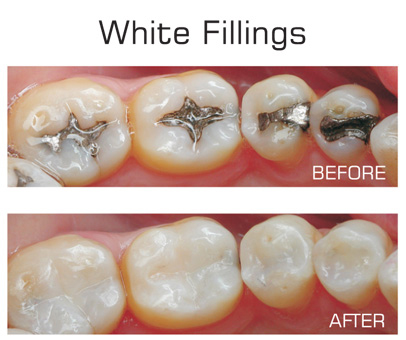 If you have a cavity or a broken tooth, you may want a white filling. These fillings are created from a composite resin that is colour-matched so it blends with the rest of your teeth.
White fillings are used as an alternative to silver fillings.
White fillings can restore not only cavities but also chipped, broken, and worn teeth.

White fillings are becoming increasingly popular when it comes to repairing damage caused by tooth decay and cavities. Here are a few of the many advantages of white fillings:
White fillings do not require as much drilling as other types of fillings. White fillings or also known as composite resin fillings require much less tooth to be removed and once the filling has been bonded to the natural tooth, it results in a stronger overall tooth.
It only requires a few seconds to harden. After the filling is placed on the tooth, a specific type of light is placed to harden it. It typically takes less than a minute.
These fillings can be used to fix chips and cracks. The quick bonding, durable and tooth-colored appearance of composite resin fillings make them perfect for repairing the cracked teeth.
White fillings can be used to replace old fillings. They can also be repaired as they start to degrade.

White fillings restore the look and the function of the damaged teeth and getting one requires special care afterward.
So here are some of the things you need to know after receiving your white fillings:

The discomfort of fillings is temporary and curable. Always take special care of your fillings.
Consult with Danny the Dentist for professional advice.